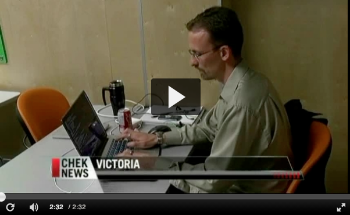 Learning to code is launching Cort Hertay into a completely new career.

“I was actually a supervisor with Staples so I made a complete shift in my career path,” he said.

The Victoria man has just completed an eight week intensive coding boot camp withLighthouse Labs, and he already has interviews lined up for junior developer positions.

“Tech is taking over everywhere, it’s involved in every little thing. I have a young family so looking to support our family in the future we want to go along with what is in vogue.”

It’s a booming industry with plenty of opportunity. B.C.’s tech sector employs 86,000 people, and wages for those jobs are 60 per cent higher than B.C.’s industrial average.

But there is a serious labour shortage, with more than 2,000 tech job vacancies in province.

“The growth is tremendous and we want to make sure we can sustain the talent to grow into that industry,” said Amrik Virk, Minister of Technology, Innovation and Citizens’ Services.

The B.C. government is spending $600,000 to study the labour market needs of the tech sector with the goal of deepening B.C.’s talent pool.

Over the next year, they will talk to tech companies and educational institutions to develop a plan to close the labour gap.

“Part of the reason we do the work is to say to parents and students who are contemplating their futures, what are the jobs that are going to be in demand today and in the future so it’s about helping students and families make better choices,” said Minister of Jobs, Tourism and Skills Training Shirley Bond.

Tech headhunter Linley Faulker said there are about 100 job openings in Victoria right now, and developers are high in demand.

“From our experience, what we’ve found is anything in the newer framework so always looking for new Ruby developers. The gaming sector is always growing, looking for Unity developers has been quite challenging for the island. While we have such amazing and robust gaming companies, we still need more developers to help build their products,” Faulker said, co-founder of Emplomacy.

Cort Hertay is ready to jump in and put his newly acquired tech skills into practice.

“Our resumes are going out left right and centre. Not too much worry on that side of the coin but it’s always a hesitant moment,” he said.

It’s an industry full of opportunity for those with highly sought after skills.