The carnival rolls into town to celebrate Victoria tech’s best

The sold-out event saw 802 attendees, a new record, pack the room the gala event known across the province for its recognition of innovation and excellence in Victoria’s advanced technology sector.

58 finalists were selected from the 189 nominations and a total of 15 awards were presented.

“It’s great to see how the tech sector has taken hold in our region and it is our honour to recognize the people, products and companies that are reshaping our community,” says Dan Gunn, CEO of VIATEC. Like the tech sector, our once little event has grown into a significant production and we truly appreciate how much our members and guests enjoy the night.”

The awards celebrate the achievements of technology companies responsible for making Greater Victoria the fastest growing technology region in British Columbia. They also provide well-deserved recognition for some of Victoria's most innovative firms and a great opportunity for the local technology community to gather and celebrate each other's successes.

Known for going over the top in the crowded pantheon of business award galas, the VIATEC Technology Awards ceremony is noted for actually entertaining the 800 plus technology community members, investors, government decision-makers, academics and media who attend.

This year’s theme was “Gritty Carnival” which symbolized the growing creativity and strength of Victoria’s technology sector. A live band with a guest appearance from Shaun Verreault of Wide Mouth Mason, performers from Island Circus Space including a trapeze artist overhead, interactive decor and guest costumes rounded out the entire evening.

The winners of the 2016 VIATEC Technology Awards are:

Technology Company of the Year (50+ employees)

Technology Company of the Year (11-49 employees)

Technology Company of the Year (1-10 employees)

Emerging Technology Company of the Year

Startup of the Year

(Sponsored by: University of Victoria)

Product of the Year

Executive of the Year

Employee(s) of the Year

Team of the Year

Employer of the Year

VIATEC Member of the Year

VIATEC (Victoria Innovation, Advanced Technology and Entrepreneurship Council), started in 1989. Our mission is to serve as the one-stop hub that connects people, knowledge and resources to grow and promote the Greater Victoria technology sector (Victoria's biggest industry). We work closely with our members to offer a variety of events, programs and services. In addition, VIATEC serves as the front door of the local tech sector and as its spokesperson. To better support local innovators, we recently acquired our own building (Fort Tectoria) where we offer flexible and affordable office space to emerging local companies along with a gathering/event space for local entrepreneurs. www.viatec.ca, www.forttectoria.ca

Thank you to the 2016 VIATEC Technology Awards Sponsors! 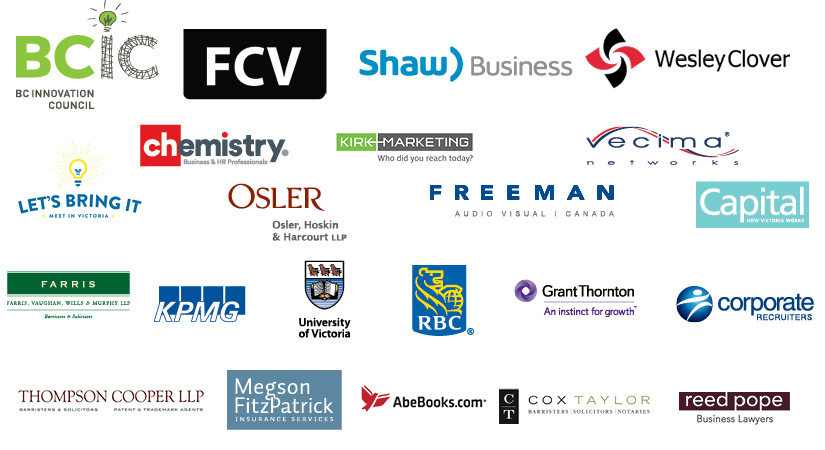