A Victoria technology company has switched to five-hour work days in an effort to attract new employees.

A boom in the tech industry has meant that companies have had to offer more than a unique workplace and cutting edge perks to draw in potential new talent.

RingPartner, a digital marketing company, requires employees to work in the office from 10 a.m. to 3 p.m., with any remaining work to be done where and when they choose.

According to Katie Hoffman, the risk manager for the company, the shorter hours and later start time make work the least hectic part of her day, as the mother of four children between the ages of one and seven.

“(Before) I had two minutes to get dressed, grab my lunch if I remembered it and then I would get to work and brush my teeth,” Hoffman told CTV Vancouver.

Hoffman also said core work hours have been like a “gift” and something others have showed an interest in.

Not only is RingPartner attracting new talent, but core work hours have shown their value in improved results, according to the CEO, Mike Williams.

“It’s really about the value and the results that they can drive rather than the time that you put into the office,” said Williams.

The boom in the industry is in part due to larger companies such as Amazon and Microsoft moving into the province, but also an increase in demand for tech workers in nearly every industry.

According to the B.C. Tech Association, companies will have to get even more creative, as they estimate by 2021 that there could be close to 30,000 unfilled positions.

With a report from CTV Vancouver’s Bhinder Sajan 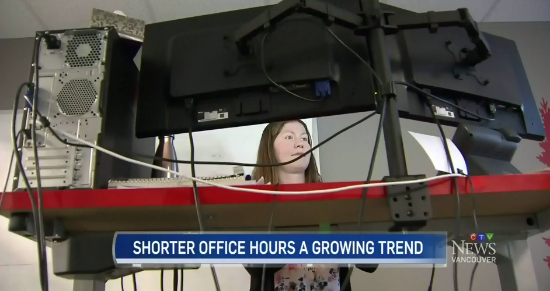